End of Tax year on Monday and I rushed out to buy the chip I had built my pc for - Core2Duo! finally! Currently at home I am running an overclocked Pentium D805 at 3ghz instead of it's regular 2.66. I was hoping for close to 4.0 but I didn't go for the full liquid cooling so I had to settle. I have got it to 3.2. As the C2D's run very cool, I am hoping to be able to get well over the rated 3.0ghz. I also bought 2Gb of RAM for $90Aus !!! Last 1Gb I bought was several hundred $$ so I was very pleased. Hopefully it will all go in and work first time!!

Just thought I would drop some tech hints as there are lots of misconceptions about hardware for Acad. When I rang the pc guy the first thing he said was "You can get a faster QuadCore for the same price". But if you peruse the hardware NG you will find some disappointed users who thought that the Quad was going to give them so much more. Truth is that Acad is STILL not multiprocessor aware, or at least not fully. Some activity can benefit from an extra 'core' but most things are single threaded. SO.. if you compare a Quad core running at 2.66 with a Dual at 3.0, guess which one runs Acad faster. Truth is lots of app's are not multi-processor aware. If you are downloading, encoding mp3's, and Acad'ing at the same time, you might like Quad. If you just want raw power then go with the faster processor. Acad will never look past the 2nd core. Not sure if Mental Ray is multi because if it is then it might make sweet use of a Quad core. Anyone?? --Word is Yes! So if you do lots of rendering then Quad can give you a decent return but your modelling work will be quicker with a quicker DualCore. Check this link to Shaan Hurley or Adesk.

Now if you are really serious you can look at the Xeon's but this is for home and I'm paying!

The other item is the Graphics card which is quite a sore spot because of a lack of clear information. Previously a high end Nvidea Quadro was the go for OpenGL performance but now in 09 they have introduced DirectX support so the games cards will give better performance for the buck! I have used a Quadro 1500fx 256mb and a mildly cheaper FX8950 512mb and I wouldn't move back to the Quadro. And that's using 06. So... go for a fast game card and it will do. Most of us can't run in hardware mode anyway so it's the cpu doing most of the work. UPDATED! In 09, a Quadro will be a massive waste of funds as it is more expensive and doesn't offer better performance (possibly poorer) than the game card using DirextX. In Vista your quadro possibly won't work at all as Vista won;t support OpenGL. Previously the ATI cards did not have as reliable drivers as NVidea but I haven't seen complaints for some time so they maybe they could be ok for Autocad. Stuart has sent me this link to a great read which perhaps indicates that I should be updated my GC as well :-) http://www.tomshardware.co.uk/radeon-hd-4870,review-31046.html


Beef your RAM. WinXP Pro will only allow any one app to use 2gb max of RAM unless you enable the 3GB switch (Autodesk). 4Mb seems to be the maximum worthwhile for WinXP pro. As we move to 64bit things will change but that's another minefield (just ask James). Ram is probably a better upgrade than your graphics card unless you have a dog or shared memory graphics. RAM is faster access than hard drive and when your pc runs out of RAM to use, it starts using the hard drive and that slows things down. Do a Control-alt-del and have a look at the performance tab. Leave it open while you work and you can review how much Physical Memory (RAM) is being used. Your page file is your hard drive 'virtual' space and though it will use some regardless, you don't want it too active. If the line's not moving you are probably ok. If it's dancing, you need RAM. 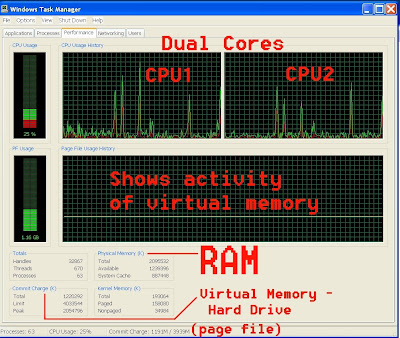 This tab is also useful for seeing how much work your cpu's are doing. It will show each core and what is doing what. I should do some testing and observations before removing the D805 just to compare.

My 3ghz Pentium D805 is much slower than a Core2Duo at 3ghz. The AMD Athlons came up against the old Pentium4's and wipped them with slower clock speeds. Clock speed is NOT everything!

Oh... and any REAL techie's out there who want to correct me then please do so. Qualified hardware info for Acad is scarce and Autodesk have not been forthcoming up until recently where they seem to be making an effort to be more helpful.
Posted by Nathan Ellery at 10:37 PM