Up on the Roof.

I have to tell you a story about the ACA Roof Object (RO). When I discovered that you could trim it and get another vertices, I emailed (first time) the ADT master, Cary Odin of Archidigm and asked him if he knew it could be done. He said he had trimmed it straight and the result wasn't too productive and thought no more of it. He also mentioned that he had spoken with the german programmer who created the roof object, having once worked across the road from Autodesk and being able to converse with some of the programming team in the early days.

Well that spiked my interest because now the RO had a human behind it and like others in newsgroups, I have complained about it's limitations and lack of improvement. I wondered whether he minded the negative feedback it received which was really the fault of it's development being abandoned though thankfully it's still intact and working in the current release. Cary had mentioned that the programmer had said it was created to do a lot more than what we see.
So on top of my blogs revealing what the RO can do, I 'hatched a plot' to make a very public statement about it's virtues, sharing tips and tricks and showing how useful it can be and also to help understand it's rules and limitations. I made a public loud noise to see if the original programmer would reveal himself. So I posted my Hints & Tricks .dwg file in the Adesk NG and at AUGI. I was already happy to share my tricks but I also thought it would be interesting to see if he could share any hidden tricks that we hadn't discovered and also maybe what he thought of the whole 'roof object' discussion. Maybe I could convince him to create his own advanced roof tool plug-in!

Well I was surprised when I got a curious message on AUGI from a 'german programmer'. Emails went back & forth and now I know that Sergej Alexandrow, (a Russian immigrant) returned to Germany after working with Softdesk and then Autodesk on ADT1 in the U.S. and went on to create a new roof tool for a German CAD company Softtech (English version) within the program Spirit . Dr Sergej is a professor of mathematics (figures!) and has worked as a programmer, mostly on 'roof's which is his first love. (Here's one of his Spirit roof's) 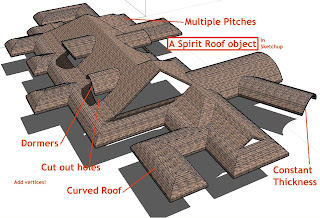 So I now have a few more tricks to share with you from the creator himself. I've even been able to share a trick or two with Sergej although he calls one (at least) a bug, but it's a useful one just the same.
Sergej has reminisced with me about the old days that he shared with the other programmers, some with whom he still works with today on Spirit. Sergej has now started a blog with some samples of his Spirit roof tool in action and yes some of them are just plain wacky (or scary) but he shows a number of tricks that we ACA users would love to see. Curved (both planes) roofs at a click, sub roofs, roofs with holes and dormers! Roof overhanging roof! Multiple slope roofs!, Hands up if you would like to see that in ACA?
So what of the ACA roof object? Sergej has shared with me what he is able to do in Spirit's version and how easy it would be to update the ADT1 version of the roof object to do so much more. But Autodesk has not the desire (yet?). Why? Why are they (intentionally?) crippling this great product with a 10 year old roof tool that they refuse to update despite many calls in the wish lists. I've seen that Revit now has a complete roof package tool. Why not ACA? Is there a political agenda rather than a customer based one? Is it because they want to force you to move to the more expensive Revit package? What other explanation am I left with? 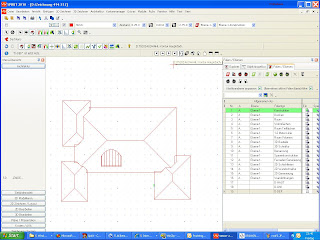 It's time again to review what's possible and easily accomplished by Autodesk in ACA and make some more noise so they know we haven't forgotten about the roof object (as though we accept the cludgey roof slabs as a peace offering). We want an improved roof tool. Even Roof slabs are not that clever anymore and badly in need of much more of an overhaul than they got in 09 (*1).
Stay tuned for Sergej's tips on the roof object - the ones I missed.
(*1) (slice a smidgeon off the Ribbon budget).
Posted by Nathan Ellery at 9:22 PM

Email ThisBlogThis!Share to TwitterShare to FacebookShare to Pinterest
Labels: Roof

Great product! Thank you Sergey. It is huge help for us!!!