Rendering in the OLD Autocad

It's a pity that the interface was so clunky. Okay I know that Max and Viz does a better job, but you could really get a reasonable job out of the old engine if you knew how to be tender. As I'm still using ADT06 (not VisRender), I've done a quick render to explore some ideas for the company. In just a few days I have designed and modelled a 12 unit (1bed) development with plans ready to be submitted for planning approval, changed numorous times as everyone has had their say AND done a reasonable street render as well, all without leaving the program! Ok the glass doesn't meet Mental Ray's level but for a factory level render I can turn them out quite efficiently. If my boss again wants design changes, I can make them, attach the entourage file and re-render (which takes about 5mins. Exporting into MAX and re-sorting all the assignments etc just doesn't have the efficiency for a rapid turnaround I need though we do get the pro's to re-do bigger jobs when it gets to marketing. 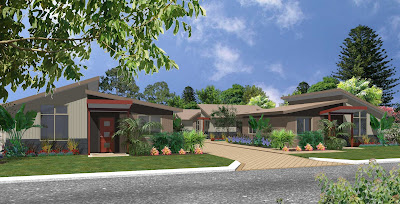 That's why I am happy to put up with the disruption to my whole rendering process to move to the New mental ray engine - because it's built inside ACAD! - It echoes my philosophy of one package even if it's taken them a couple of releases to get it right. But as you can see below, I have still some way to go to get a handle on the ACA08 mental ray. (It's the same files). I couldn't remember how to get the sky on and was scared that everything would go black if I did.
Now the landscape objects all were created in ADT06 and as you can see that although you cannot create them in 08/9 (there is no tool for this) you can create them in 06 and bring them into 07/8/9. All plants except the foreground which was Gimped in, are rendered in the dwg file. You can also see that MR has different quality standards and not all my plants are acceptable but I'm sure I can sort this out..

Unfortunately there are other issues with the MR. I tried to render at 2200x900 and it crashed. (only 2GB of RAM). So I defaulted back to 06 though I will keep trying as well as upgrading memeory.
My main point is this. Most of us don't render because it takes too long. But I have my process efficient and can turn a render out as part of the process, with relative efficiency.
And it's so much fun!!!
Hopefully I can share more of the process with you but it will be for MR as 06 is so old now!
(If anyone out there is stuck in ADT6 or previous and would like me to share my small amount of wisdom then please let me know).
Best to ya

ps. those on 07 should know that the landscape objects do not operate properly.

Posted by Nathan Ellery at 3:28 PM

Email ThisBlogThis!Share to TwitterShare to FacebookShare to Pinterest
Labels: rendering

Thanks Ken, welcome. Come back and if you have any great tips, drop us an email.

HOW do you "bring in" old landscape objects into 2008?

Basically any landscape object that is created in acad 6 or prior can be cut & pasted into 08/09 and rendered. Some tricks;
I abandonded the library editor except to create the item at first. It also doesn't work in 7-9.
Once created I cut & paste into a dwg file so that I can see all my objects and not have to guess. I have a tree file, a plant file etc. They are sized correctly etc. It's a lot quicker and more efficient than using the libary.
My file would be opened in shaded iso view so each item can be easily seen.
If you want me to do a full article on it, post back. I would be happy to share my work method.

Nathan,
Thanks! I would be interested in seeing your process.
What I'm understanding is you create the landscape objects in 06 with image and opacity map, insert those into a drawing in 06, then copy/paste those objects into a 08/09 drawing.
I work in 2 different offices, so I need to try this later when I have both installs available.

Yes that's it (gets around the horrible library tool) but I've found the MR engine a lot fussier on the quality of the maps used. My own maps suffer somewhat.
I will try to post my process ASAP. Although it's outdated I believe it could have application in 08/09 and intend to explore it when I upgrade my own rendering process.
Just one tip for 06. Make sure your map ref only contains the jpg itself and NOT the c:/blah/blah etc. As long as your maps are in the search path it will be fine. Trouble is if you shift a map or open on a different pc it's stuffed. I use Explorer and cut & paste the name straight in to Acad.